On to pies! While the request was for pecan, I’m also going to talk about chocolate chess pie, which I love even more than pecan!

How about a pecan pie recipe?

I last made a pecan pie was a couple of months ago. I was on a guys weekend when the subject came up. Somehow, it became clear that (similar to cornbread), non-southerners don’t understand that pecan pie refers to something very specific!

It’s fine if you want to put chocolate or bourbon or whatever into your pie, but even though you might call it “chocolate bourbon pecan pie,” it is not a type of “pecan pie” any more than “rice milk” is a type of “milk.”

Pecan pie has only the ingredients as listed on the bottle of Karo syrup. The other thing that my fellow weekenders were confused about was pronunciation, of Karo and pecan. First of all, the syrup. It’s KAY-rho. There is no alternative.

Pecan, however, has two accepted pronunciations, PEE-can and puh-KAHN. NC, where I went to school, prefers PEE-can. Georgia, where my parents are from, prefers puh-KAHN (it’s more subtle than that). But don’t ever, ever say puh-CAN or PEE-kahn, Northerner!

Our host, like me, has Georgia roots and went to school in NC (but at Duke, ugh), and even grew up in Georgia, so had all the ingredients for the pie laying around his vacation home, and I got to work!

Now, for all my big talk about the “one true way,” like most people, I only consider sacred what is important to me. As you saw, I make non-dairy, egg-free cornbread! And I don’t use the recipe on the side of the Karo bottle! My host was dumb-struck!

Instead, I use a recipe from Treasured Southern Family Recipes (note that I probably would go for the $2 used copies rather than the $1000 new one). But like me, my mom likes to tinker with recipes, so I use her modifications. 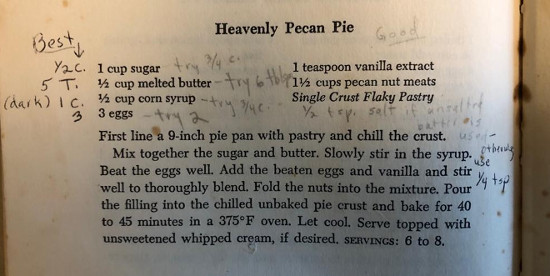 Wow. I just noticed the “6 to 8 servings.” This pie has about 3600 calories. I would suggest cutting smaller slices!

Even better than pecan pie, though, is chocolate chess pie. If you’re not from the south, you may have never heard of a “chess pie,” though technically pecan pie is a type of chess pie. A chess pie is a pie principally made from sugar, eggs, and butter.

In other words, a custard pie. Why is it called a “chess pie?” Nobody is really sure, but my favorite origin story is that some Yankee was offered pie and asked what kind it was. Well, it was a custard pie, but without any additions: just pie, or “jess pie” with the accent!

I got my chocolate chess pie recipe from Christ Church Cooks (again, not sure I would spring for the new version), which is a collection of recipes from the women of the church where my wife grew up (Christ Church Episcopal in Charlotte, NC). 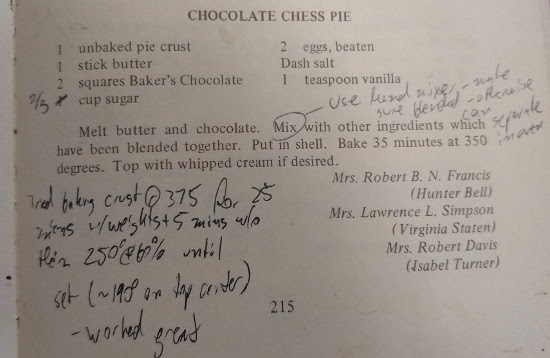 Side bar: ahh yes, the South. You can see the women who contributed are cited with their husbands names. When we were first married my wife’s parents would send her mail addressed to Mrs. Andrew Certain. I miss a lot about the South, but not that.

So I usually blind bake my crust for 25 minutes at 375 with weights and another 5 w/o to crisp it up. Then I finish in a combi-steam oven at 250 w/60% humidity. If you don’t have a combi-steam, you’ll probably need a higher temperature.

How long? Until it’s done: it should be 190 degrees in the top center, but mostly it should be completely set. So if you jiggle the pan, it should all move as one semi-solid mass. It shouldn’t seem more liquidy in the center. Probably 45 minutes or so?

Funny story - at Xmas last year I forgot to put aluminum foil over the crust before putting down the weights. These were little ceramic balls the size of peas. The crust came out looking like a golf ball! And the weights were very tedious to remove. Don’t do that!

Also, you’ll see that my past self encourages my future self to mix using the hand mixer. I’ve definitely not mixed well enough and ended up with a layer of unsweetened chocolate on top and a layer of sugary-eggy stuff on the bottom!

This pie is amazing. Like deep chocolate fudge. Also, it doesn’t really need to be a pie. You can just bake in ramekins, or whatever. I mean, the crust is nice and all, but really it’s just a vehicle for the amazing chocolaty goodness!

One thing that I didn’t write is that if you double the recipe, it’ll fit into a deep-dish 9-inch shell. It does expand while cooking, though, so don’t fill it all the way to the top.

You might be wondering why if these are both chess/custard pies, do I not blind bake the crust for the pecan pie? Mostly laziness. I’m sure it would be better, but for whatever reason (insulation from the pecans?), the soggy-crust problem isn’t quite as pronounced.

Also, you can see I’ve reduced the sugar. My general rule for desserts is to reduce sugar by ⅓ to ½. Why not with the pecan pie? Pecan pie is supposed to be almost overpoweringly sweet, like a praline. With chocolate chess pie, you want the chocolate to be front and center.

Next up, the last stop in our journey through Andrew’s southern favorites, barbecue.